The most unexpected answer to a counting puzzle

Let’s play a strange sort of mathematical croquet. We’ll have two sliding blocks and a wall. The first block starts by coming in at some velocity from the right, while the second starts out stationary. Being overly-idealistic physicists, let’s assume that there’s no friction and that all collisions are perfectly elastic, meaning no energy is lost.

The simplest case is when both blocks have the same mass.

What about if that first block has 100 times the mass of the second one? It’s not entirely obvious how to predict the dynamics here; I promise I’ll explain all the relevant physics in due course. But in the spirit of getting to the punchline, let’s just watch what happens.

That second one will keep bouncing back and forth between the wall and the first block with 100 times its mass, like a satisfying game of breakout, slowly and discretely redirecting the first block’s momentum to point in the opposite direction. In total, there will be 31 collisions before both blocks are sliding off to infinity, never to touch again.

What if the first block has 10,000 times the mass of the second one?

In that case, there would be quite a few more clacks, all happening very rapidly at one point, adding up to 314 collisions in all.

If the first block was 1,000,000 times the mass of the second, then again, with all our idealistic conditions, almost all clacks happen in one big burst, this time resulting in 3,141 total collisions.

Perhaps you see the pattern here, though it’s forgivable if you don’t, since it defies all expectations. When the mass of that first block is some power of 100 times the mass of the second, the number of collisions will have the same digits as the beginning of π≈3.14159.

This absolutely blew my mind when it was first shared with me. Credit to the viewer Henry Kavle for introducing me to this fact, which was originally discovered by the mathematician Gregory Galperin in 1995, and published in 2003.

I’ll emphasize again that this process is way over-idealized, quickly departing from anything that could possibly happen in real physics. But of course, you and I both know that this is not interesting because of its potential as a π-computing algorithm, or as a pragmatic physics demonstration.

It’s mind-boggling because why on earth do the digits of π show up here? And it’s such a weird way for π to show up, too: Its decimal digits are counting something, whereas usually its precise value describes something continuous.

I will show you why this is true. Where there is π, there is a hidden circle. And in this case, that hidden circle comes from the conservation of energy. In fact, in the next two lessons you’ll see two separate methods for understanding this hidden π, each as stunning as the surprising fact itself. 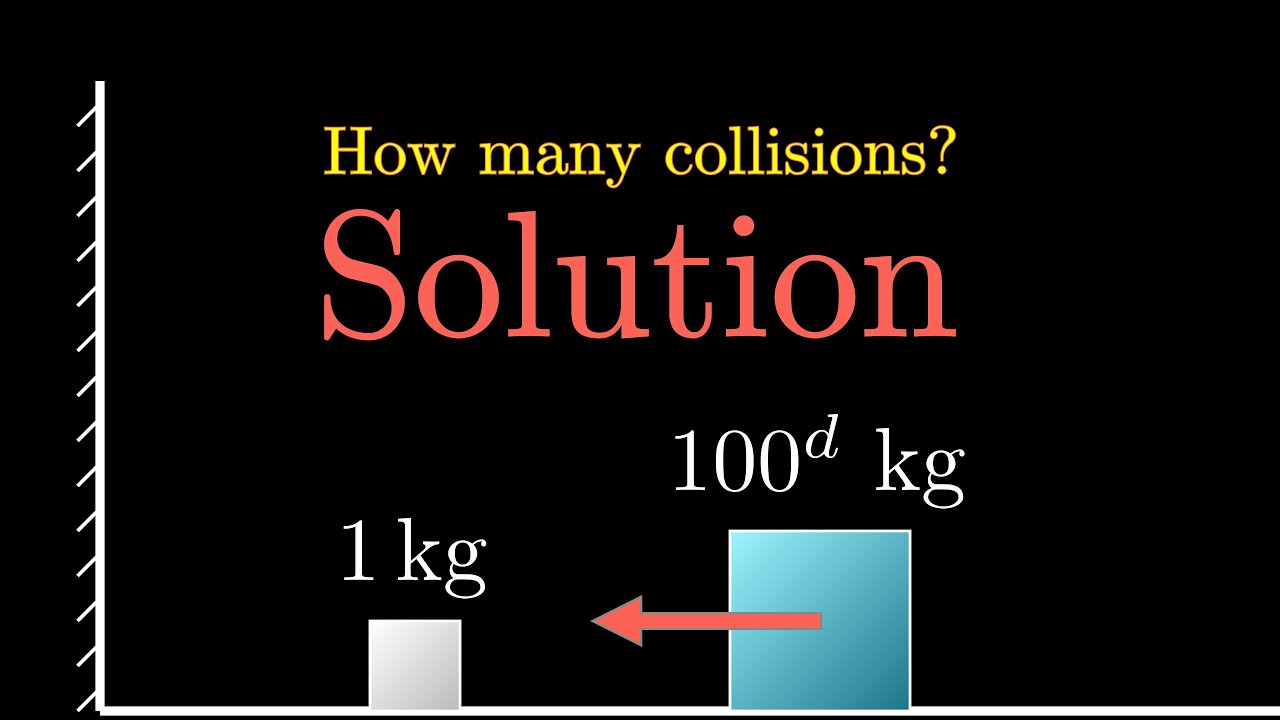 Why do colliding blocks compute pi?
Table of Contents