“Mathematics requires a small dose, not of genius, but of an imaginative freedom which, in a larger dose, would be insanity.”

In the last chapter, along with the ideas of vector addition and scalar multiplication, I described vector coordinates, where there’s this back-and-forth between pairs of numbers and two-dimensional vectors.

Now I imagine that vector coordinates were already familiar to many of you, but there’s another interesting way to think about these coordinates, which is central to linear algebra. When you have a pair of numbers meant to describe a vector, like (3,−2), I want you to think of each coordinate as a scalar, meaning think about how each one stretches or squishes vectors.

In this sense, the vector that these coordinates describe is the sum of two scaled vectors. This idea of adding together two scaled vectors is a surprisingly important concept. Those two vectors i^ and j^​ have a special name: Together they are called the “basis” of the coordinate system. What this means is that when you think about coordinates as scalars, the basis vectors are what those scalars actually scale.

What values of the scalars α and β satisfy the following equation? αv+βw=5i^−21​j^​

We have a new pair of basis vectors v and w. Take a moment to think about all the different vectors you can get by choosing two scalars, using each to scale one of the vectors, then adding them. Which two-dimensional vectors can you reach by altering your choice of scalars?

The answer is that you can describe every possible two-dimensional vector this way, and I think it’s a good puzzle to contemplate why. A new pair of basis vectors like this still gives you a way to go back and forth between pairs of numbers and two-dimensional vectors, but the association is definitely different from the version you get using the standard basis of i^ and j^​.

I’ll go into much more detail on this point in a later chapter, describing the relationship between different coordinate systems, but for now I just want you to appreciate that any way to describe vectors numerically depends on your choice of basis vectors.

Any time you’re scaling two vectors and adding them like this, it’s called a “linear combination” of those two vectors. Where does the word “linear” come from here? What does this have to do with lines? Well, when you multiply a scalar by a vector, it changes the magnitude of that vector. Multiplying every real number by the vector produces an infinite line that passes through the origin and the point defined by the vector.

So a linear combination of two vectors is a method of combining these two lines. For most pairs of vectors, if you let both scalars range freely and consider every possible vector you could get, you will be able to reach every possible point on the plane. Every two-dimensional vector is within your grasp.

However, if your two original vectors happen to line up, the lines produced by the scalar multiplication will be the same line, so adding them together can't yield a vector outside of that line. There’s a third possibility too: Both your vectors could be the 0 vector, in which case you’ll just be stuck at the origin.

The set of all possible vectors you can reach with linear combinations of a given pair of vectors is called the “span” of those two vectors. Restating what we just saw in this lingo, the span of most pairs of 2D vectors is all vectors in 2D space, but when they line up, their span is all vectors whose tip sit on a certain line.

This is a good time to talk about how people commonly think about vectors as points. It gets very crowded to think about a whole collection of vectors sitting on a line, and more crowded still to think about all two-dimensional vectors all at once, filling up the plane.

So when dealing with collections of vectors like this, it’s common to represent each one just with a point in space, the point at the tip of this vector. That way, if you want to think about every possible vector whose tip sits on a certain line, just think about that line itself.

Well, their span is the collection of all possible linear combinations of those two vectors, meaning all possible vectors you get by scaling each of the two you start with in some way, then adding them together. You can imagine turning two knobs to change the two scalars defining the linear combination, adding the scaled vectors and following the tip of the resulting vector. That tip traces out some kind of flat sheet cutting through the origin of three-dimensional space.

Which vectors in 3D space are not in this span?

The set of all possible vectors whose tips sit on this flat sheet is the span of your two vectors. Any vector which does not lie on the plane is not in the span.

There is another possibility though, if you just randomly choose a third vector, it’s almost certainly not sitting on the span of the first. Since it’s then pointing in a separate direction, it unlocks access to every possible three-dimensional vector! The way I like to think about this is that as you scale the new third vector, it moves around the span of the first two to sweep it through all of space.

It’s kind of like you’re making full use of the three freely-changing scalars that you have at your disposal to access the full three dimensions of space.

In the case where the third vector was sitting on the span of the first two, or the case where two vectors happen to line up, we want some terminology to describe the fact that at least one of these vectors is redundant, not adding anything to our span. Whenever this happens, where you have multiple vectors, and you could remove one without reducing their span, the relevant terminology is to say they are “linearly dependent”.

Another way of phrasing this would be to say that one of the vectors can be expressed as a linear combination of the others. That is, it’s already in the span of the other two. On the other hand, if each vector really does add another dimension to the span, they are said to be “linearly independent”.

Linearly Dependent: uLinearly Independent: u​=av+bw for some a and b=av+bw for all a and b​

Earlier we learned that any pair of vectors could form a new basis as long as they didn't line up. If pair of vectors are linearly independent, their linear combination can span the entire 2D plane, meaning they can form the basis for the plane. 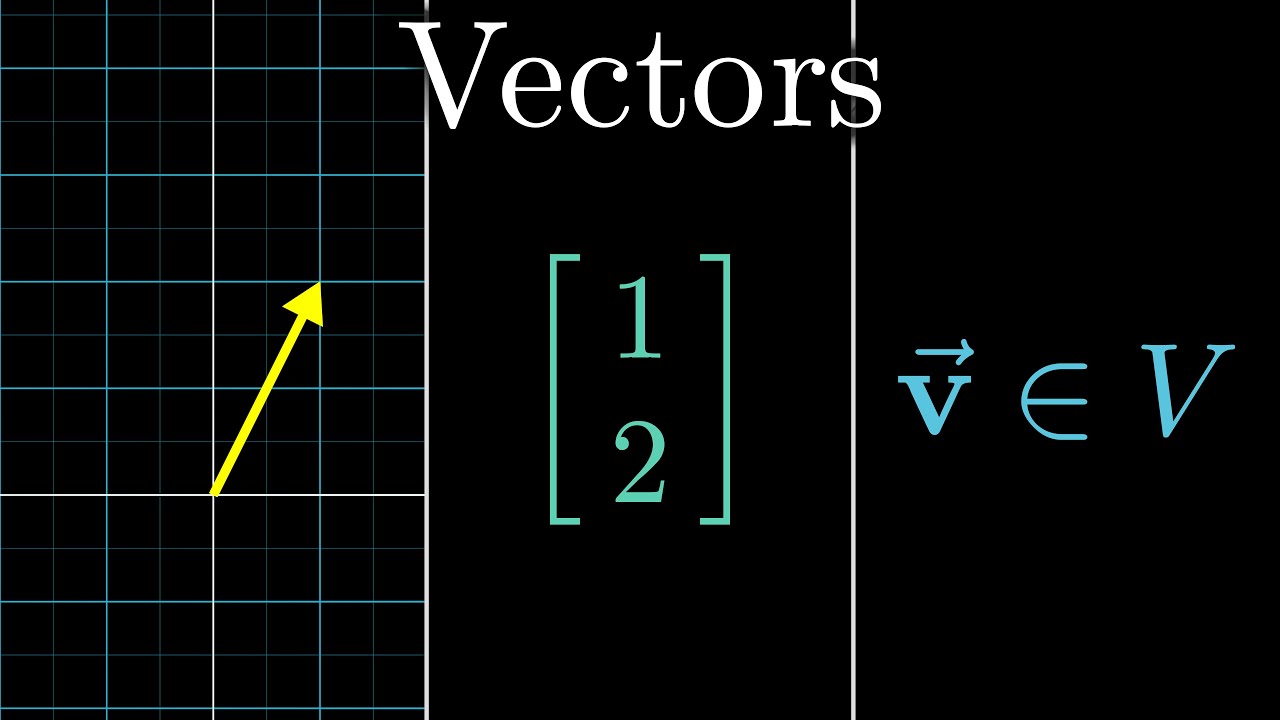 Vectors, what even are they? 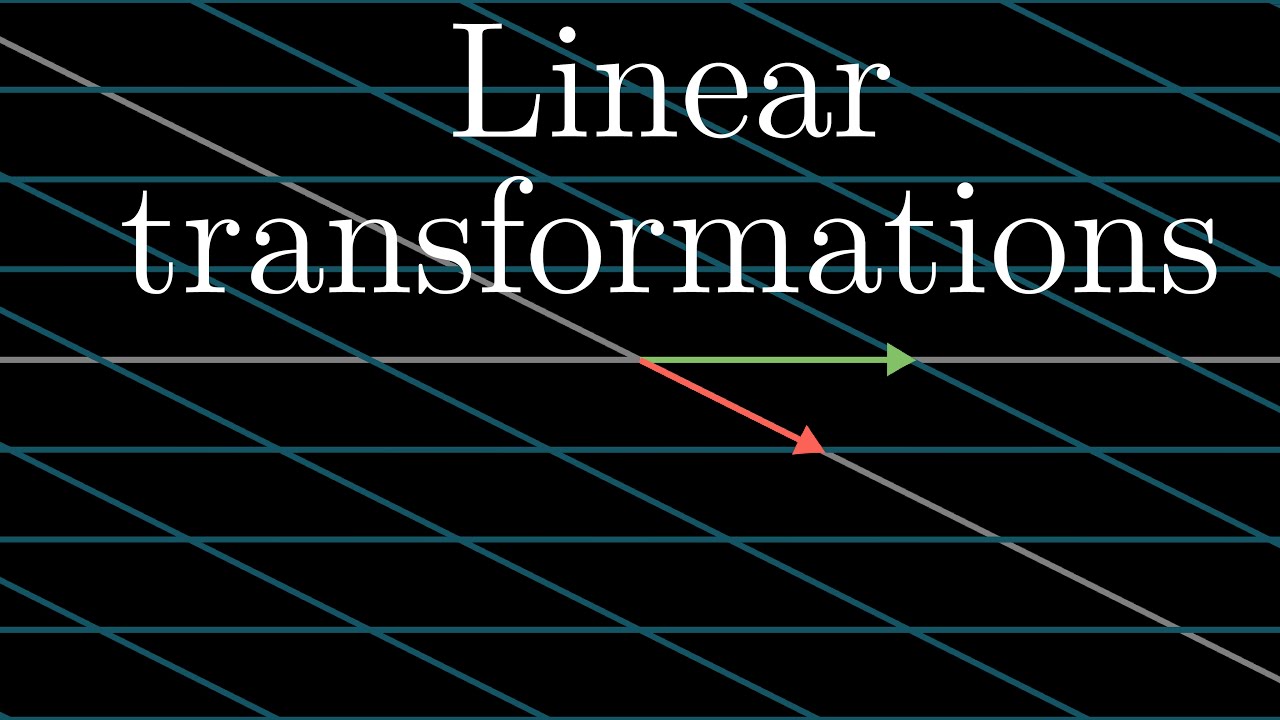